Tabitha Perkins, age 25, of Leslie County, Kentucky died at the scene of a 3 car crash on Ky 15 in Breathitt County, Kentucky. This accident was a head-on collision caused by a driver of a Chevy Truck heading southbound on Ky 15. It is reported that the southbound driver, cross the center line of the road, sideswiped one truck before colliding head-on with Ms. Perkin’s Chevrolet sport-utility vehicle. The driver of the at-fault vehicle and two passengers from Ms. Perkin’s vehicle were taken to area hospitals to be treated fro their injuries. The Perkins family and the passengers of Ms. Perkins vehicle have Kentucky legal rights related to this accident. (link to an explanation of the legal rights of innocent persons injured or killed in Kentucky Auto Accidents).

Drivers of vehicles in Kentucky owe a duty under the law to other drivers, passengers, bicyclists, and pedestrians, to operate motor vehicles safely and with controls of the roadway. When a vehicle leaves its lane and enters another lane of traffic, that vehicle has not been operated safely nor under the controls and constraints of the roadway. Thus that driver has been negligent in the operation of that vehicle and injuries that ensue from such are actionable under Kentucky law.

Donald R. Pickett, age 71, of Flatrock, Indiana, drove his 2006 Volkswagen the wrong direction on I-71 Saturday evening and caused a multiple car accident that has injured two people and killed himself and one other. The crash happened at approximately 9:20 p.m. near Crestwood, Kentucky in Oldham County. Reports indicate that alcohol may have been a factor leading to this fatal accident.

Pickett, who was driving northbound in the southbound lane of traffic, collided head-on with a 2007 Infiniti driven by Victor Chavez, age 27, of Louisville, Kentucky. George Chavez, age 27, and Julio Chavez, age 29, were both passengers in Victor Chavez’s vehicle. All three passengers in the Infiniti were taken to UL Hospital to be treated for their injuries. George Chavez died at UL Hospital due to the injuries he had sustained in the crash. Puckett was also killed in the crash after he was ejected from his vehicle which then struck a third vehicle.

While it is not fully known at this time why Pickett was driving in the wrong lane of traffic, if alcohol was a factor this tragedy is even worse. The innocent victims of this crash, the Chavez’s and their families should pursue every avenue possible to have all the causes of this crash investigated, and if alcohol truly was a factor, they should utilize not only the criminal justice system, but also the Kentucky civil justice system to seek justice.
END_OF_DOCUMENT_TOKEN_TO_BE_REPLACED

This Kentucky auto accident occurred Tuesday on Ky 90 in Wayne County, Kentucky. Reports indicate that 25 year old Eric Branscum was driving a 2002 Kia Spectrum when his vehicle hit the rear of a 2003 Camry driven by Jessica Whitaker, age 28. Both vehicles were traveling eastbound. The collision between Branscum’s car and Whitaker’s car sent the Camry into the westbound lane of traffic where it collided with a 1992 Dodge caravan driven by Veila Stephenson, age 75.

Branscum was not injured in the crash. Whitaker and Stephenson were seriously injured and flown to UK Hospital where they are being treated. A passenger in Stephenson’s Caravan, Gladys Parmley, age 69, of Monticello, had been taken from the scene of the accident to UK Hospital. Tragically she died from her injuries that evening. The passenger in the Camry, Louanna Ellis, age 57, was pronounced dead at the scene of the accident.
END_OF_DOCUMENT_TOKEN_TO_BE_REPLACED 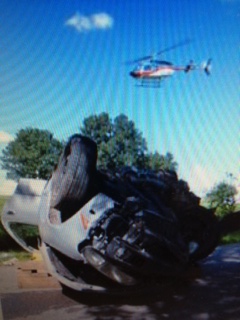 Reports indicate that a gray Nissan Altima traveling on Rice Road in Anderson County, Kentucky hit a tree, flipped and landed upside down in the middle of Rice Road on Tuesday afternoon. The car had four teens in it, one male and three females. One of the female teens and the male teen were both airlifted to UK Hospital and the other two female teens were taken by ambulance to the hospital.

This tragic accident is currently under investigation as to the cause of the car crash. The passengers of this vehicle have Kentucky legal personal injury claims against the driver of the vehicle’s insurance company. As such, this insurance is the initial source of trying to recover legal damages, and will help to pay medical bills, any future medical bills, compensate for pain & suffering, and cover other related monetary issues.
END_OF_DOCUMENT_TOKEN_TO_BE_REPLACED 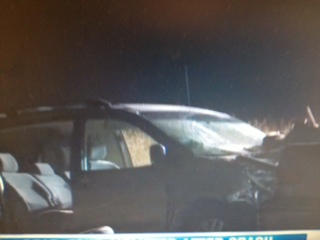 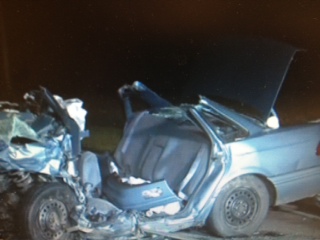 This Kentucky Car Accident happened on Tuesday night around 8:00 p.m. on Ky. 39 after a car crossed the center line of the road and struck an on-coming van. The driver of the car died from injuries from the crash, and two of the passengers of the car, 13 year old Emma Miracle and 19 year old Richard Clay Miracle were severely injured. The Driver of the van, 40 year old Michelle Smith, of Crab Orchard, and her passenger Samuel Smith were also both severely injured. All four injured persons were flown to UK Hospital for medical treatment.

Accident re-constructionists are still trying to piece together what caused this crash to occur.

The victims of this terrible crash will have Kentucky Personal Injury Claims that can be made to help them pay for their expected extensive and expensive medical bills. They will also be able to seek other compensation for their legal damages suffered, which will include pain & suffering.
END_OF_DOCUMENT_TOKEN_TO_BE_REPLACED

This single vehicle auto crash happened when the driver of the vehicle hit a guard rail, then attempted to over correct the vehicle, and ended up flipping the vehicle in the median. It resulted in the driver and one passenger suffering severe injury and being taken to the hospital. Another passenger, Ricky Lugo, died at the scene of the crash from his injuries. This Kentucky motor vehicle accident happened in Gallatin County, Kentucky. The cause of the crash is still under investigation.

Drivers and passengers in vehicles that are involved in Kentucky crashes have legal rights that need to be protected. It’s important to examine what caused the crash so that responsibility can be assigned, and those not at fault can seek legal justice and compensation under the law for their financial and legal damages. Serious accidents run up huge medical bills, lost wages, and can result in permanent injuries. Deaths in accidents are even more emotionally and financially overwhelming. Its important to have objective, knowledgeable, and aggressive help through the legal, medical, and insurance pitfalls that arise under such conditions.

This terrible auto accident happened Sunday around 4:15 p.m.. Robert Kidd was driving his pickup truck when he was rear ended by another vehicle. This first collision caused Mr. Kidd’s truck to cross into the south bound lane of US 68 and crash into a vehicle driven by the Mathis family. Joseph & Donna Mathis were killed in the crash. Mr. Kidd was flown to UK Hospital for his injuries.

Mr. Kidd and the Mathis family have legal rights related to this multi-vehicle accident. Under the law, they can seek legal civil justice, recovery their financial losses and being compensated for what has happened. In serious accidents like this, it’s important to have good legal representation to protect and preserve evidence related to the crash, deal with insurance and medical providers, and protect the right of people who have been injured or killed.
END_OF_DOCUMENT_TOKEN_TO_BE_REPLACED

On Friday, Vickie Carol Lynch, age 49, of Georgetown, Kentucky, was killed in a car crash that involved a church van running a red light and hitting her vehicle. Ms. Lynch died at the scene of the crash. This terrible accident was caused by a 22 year old driver not paying attention. Witnesses report that he light had been red for a while when the van failed to attempt to stop and ran through the intersection of the Georgetown Bypass and Paris Road. Reports indicate that the evidence demonstrates that the van driver never even applied the brakes as he negligently entered the intersection. The driver of the van has been criminally charged with reckless homicide. The van is owned by Bluegrass Baptist Church.

On Saturday, Phillip Lee Burgess Jr., age 28, was a passenger in a car that ran a red light at the intersection of Lemons Mill Road and struck another vehicle. Mr. Burgess was taken from the scene of the accident to Georgetown Community Hospital, where he died from his injuries. The driver of the vehicle that Mr. Burgess was in has been criminally charged with a DUI and second degree manslaughter.

These are two instances where drivers have failed to be patient and attentive to the road. Driver impairment can come from intoxication or just plan paying attention to other things rather than driving. In one case, such failure to be attentive is clearly related to illegally driving after drinking. The other is unclear as to what took the driver’s attention from the road. The results however have been the same. Two innocent people are dead due to negligent driving of others, and families are left to suffer for the loss of their loved ones. In cases like this, it is important that a message be sent to the rest of the community that this sort of negligence while operating a car can be deadly and will not be tolerated. The criminal aspect of sending that message to the perpetrators and the community has begun in these two cases. There is also a civil justice avenue available to victims who are injured and families of victims killed, due to the negligent driving of others, in that they can seek to recover the civil damages from accident. Kentucky Civil Legal Damages include things like recovery of costs of medical bills, lost incomes, emotional trauma, and pain and suffering.
END_OF_DOCUMENT_TOKEN_TO_BE_REPLACED

Alexander Tipton, age 18, and Johnathan Newsome, age 18, were both killed in a Kentucky car crash. Six other passengers in the vehicle also suffered injuries. Police reports indicate that a Ford Mustang, being driven Mr. Newsome, attempted to make a u-turn onto Ky 1469 and struck an embankment. Reports indicate that no one was wearing a seat belt. The accident is still under investigation.

Passengers injured in motor vehicle accidents are afforded PIP/No-fault insurance coverage to pay for initial medical bills and other damages, including lost wages due to injuries. The six injured passengers, based upon their injuries will be able to file claims for such insurance assistance, and based upon the severity of their injuries, they may want to instruct the insurance company to withhold all payments of such funds until such time that hey can direct payments in a manner that most effectively assists them in their various situations. In addition to the PIP claims, the surviving passengers may also have Kentucky Personal Injury Claims.

Based upon what every caused the accident to occur, all the occupants of the car may have legal claims stemming from the accident and cause thereof. In cases like this it’s important to have an accident re-construction performed to determine what factors lead to the crash. Those killed in the crash may have Kentucky Wrongful Death Claims. At this point, and until it is determined what fully happened in this crash, the legal claim status of those involved is yet to be determined.

This Kentucky car crash happened Tuesday around 8:00 p.m. at the intersection of US 60 Bypass and Canton Road, 2 miles west of Cadiz, Kentucky. Reports indicate that Mary Taylor, of Barbourville, was driving westbound on Canton Road and failed to stop at the stop sign at the intersection with US 60 Bypass. Upon entering the intersection, Taylor’s vehicle was struck on the passenger side by a vehicle driven by Kristena Gallimore, of Dresden, TN, which was traveling eastbound on US 60 Bypass. Taylor’s failure to stop at the stop sign and failure to yield the right of way to Gallimore appears to be the cause of this accident.