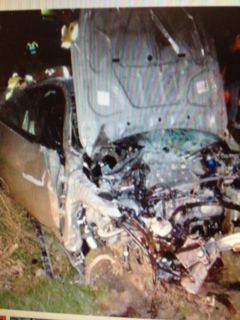 Tuesday Night in Laurel County, Kentucky a single vehicle accident occurred and seriously injured two young men. The accident occurred along Wyan Road, west of London, Kentucky. The vehicle was a Nissan 300Z, driven by Cameron Harville, age 23. The car reportedly went off the road, traveling nearly 40 feet and crashed head-on with a tree. Both the driver and the passenger, Michael Cornett, age 23, were airlifted to UK hospital to be treated for their injuries.

While it is unclear what caused this auto accident, under Kentucky law, drivers of motor vehicles owe a duty to others, including their passengers, to remain in control of their vehicles and to avoid causing injury to others, including passengers in the vehicles. As such, the passenger, Mr. Cornett, has a Kentucky personal injury claim (click here for a link to information related to legal damages that are recoverable and compensable under Kentucky law) against the driver of this vehicle and the insurance company which insured it. He can seek legal damages to cover his medical bills, lost wages, and pain & suffering from this accident.

A two vehicle Kentucky auto accident occurred Sunday evening around 6:30 p.m. in Graves County, Kentucky, at an intersection between Wingo, Kentucky and Sedakia, Kentucky. Based upon the reports available, the accident occurred due to driving negligence of 21 year old Ashley Nadvornik, who was driving on Ky 1748 and failed to stop at the stop sign at the intersection with Ky 339. In doing so, Ms. Nadvornik pulled out in front of and in the pathway of a vehicle driven by 72 year old Marvin Myatt, who was traveling eastbound on Ky 339. As a result of this accident, Mr. Myatt and his passenger Kathy Myatt both received injuries. Ms. Nadvornik and her two passengers all were transported to Jackson Purchase Medical Center for treatment for their injuries.

As such, due to the negligent driving of Ms. Nadvornik, the Myatt’s and the passengers in Ms. Nadvornik’s vehicle will all have Kentucky Personal Injury Claims against Ms. Nadvornik and her auto insurance carrier. Passengers of vehicles, even passengers in the vehicle of the at-fault driver, are entitled to civil injury protection under Kentucky law.

This tragic Kentucky car crash occurred early Wednesday morning on the Pennyrile Parkway shortly after the 53 mile-maker in Hopkins County, Kentucky. The driver of the vehicle lost control of the car and went into the median, and then the vehicle flipped over two lanes of traffic. The driver was thrown from the vehicle and died from his injuries. One passenger, Thomas Hawkins, of Hanson, was also thrown from the vehicle. Another passenger, Amber Harrison, of Henderson, was wearing her seat belt and remained in the vehicle. Both passengers survived the crash but are suffering severe injuries from the crash. They, as passengers in this vehcile, may be entitled to legal compensation for their injuries from this crash. (Legal Damages)

Police reports suspect that alcohol may nave been a factor in this tragic crash.

Information on the legal rights of persons injured from alcohol related auto accident can be found at the Ackerson Law Offices’ website (www.kyfirm.com).

Around 3:00 a.m. Saturday two vehicles in warren County, Kentucky collided at the intersection of Porter Pike Road and Petty Road. One vehicle driven by, Linda Cowles, was traveling on Porter Pike Road when another vehicle driven by Jonathan Elmore attempted to cross Porter Pike Road, traveling on Petty Road. This resulted in the collision. The accident resulted in serious injury to Ms. Cowles and the death of Mr. Elmore and his passenger Craig Armstrong. As such the factors that lead to this accident will determine who is at-fault for the crash that has created a potential Kentucky Personal Injury Claim and two potential Kentucky Wrongful Death Claims.

Information about Kentucky Personal Injury Claims, Kentucky Wrongful Death Claims, and the civil legal damages that can stem from these types of accidents can be found at the Ackerson Law Offices’ website at www.kyfirm.com.

This auto accident happened Thursday in Pike County, Kentucky on U.S. 460. The driver of a vehicle traveling westbound on U.S. 460 crossed the center line of traffic to avoid a stopped vehicle in that lane of traffic. In doing so that vehicle struck a vehicle traveling eastbound, driven by Debra Fouts of Virgie, Kentucky. The accident caused serious injury to Ms. Fouts and two passengers in her vehicle. One of the passengers, Kyla Fouts, was airlifted to the hospital due to the severity of her injuries. Tragically, Kyla Fouts, died Friday morning at Johnson City Medical Center due to the injuries from the crash.

This Kentucky auto accident has legally given rise to both Kentucky Personal Injury Claims and a Kentucky Wrongful Death Claim. The two survivors from the Fouts vehicle will have civil legal claims for damages from the accident, and the Fouts family will be able to legally bring a Wrongful Death claim related to the loss of Kyla’s life.

The driver who crossed the center line was also injured, and depending upon the circumstance may have legal claims against the stopped vehicle in the roadway. The Fouts family’s legal claims will be primarily against the driver who crossed the center line. Based upon the severity of the injuries and the death involved in this accident, adequate insurance coverage will be a legal issue to contend with. As such, in severe accidents, knowledge of insurance laws and coverage available is important, including the possibility of utilizing under insured and/or uninsured motorist coverage.

END_OF_DOCUMENT_TOKEN_TO_BE_REPLACED

A major legal concern from this accident is the civil liability owed by Mr. Ryan to his innocent victim. Because Mr. Ryan failed to maintain his automobile insurance, the civil legal damages sustained by Jackee Duncan may go without compensation. In cases where the at-fault party has no insurance, it’s important that the victim carry uninsured motorist coverage on the vehicle they are in. Uninsured motorist coverage insures drivers against legal damages caused by drivers who do not have insurance. In cases that involve drinking and driving, another potential source for civil legal recovery and compensation for innocent victims is possibly from the bar or restaurant that last served the alcohol to the drunk driver that caused the accident. Under Kentucky law this type of legal action against bar/restaurant owners who over serve alcohol to drivers is known as a 3rd party Kentucky Dram Shop Action, and involves claims of negligent alcohol service to at-fault drivers. The difficult part in cases of over service is acquiring the knowledge of where the at-fault driver last was served alcohol. As such, immediate legal action against the driver may be the only means of forcing information about where the person had been drinking prior to the accident.

Information about the legal rights of persons hurt or killed by DUI accidents in Kentucky can be found at the Ackerson Law Offices. (www.kyfirm.com).

A tragic and fatal accident occurred in Anderson County, Kentucky, as four teenagers were traveling home to Christian County, Kentucky, after watching a high school basketball game. The four high school students were traveling in a 2010 Nissan pickup truck which collided with the back end of a semi tractor trailer that had parked in an emergency lane. Two of the teenagers were seriously injured. One teenage, Dequavius Weaver, age 16, died at the scene of the crash, and another teenager, 17 year old Jacob Blankenship, was transported to UK Hospital where he died there from the injuries sustained in the accident. Josh Harbold, age 16, and Dendrick Holmes, are hospitalized due to their injuries.

In a case such as this, where two are killed and 2 others seriously injured, the primary concern from a legal perspective is will there be enough insurance coverage to afford justice to those injured and the families of the killed. It becomes complicated and ever insurance policy, including many that most would not consider as possibly affording coverage must be examined to insure that the victims get the fullest amount of justice afforded under the law.

The legal claims from this accident will be both Kentucky Personal Injury Claims and Kentucky Wrongful Death Claims. The damages will vary form victim to victim based upon the facts specific to each victim. Information about the legal rights of persons injured in Kentucky auto accidents and the legal rights of families who have lost a loved one in a Kentucky auto accident can be found from the Ackerson Law Offices. (www.kyfirm.com)

A Greenup, Kentucky car accident occurred shortly after 4:00 p.m. Sunday on U.S. 23. It involved two vehicles. The crash has tragically taken the lives of three people, Tracie Howard, of Portsmouth, Ruby Brown, of South Shore, and Jamond Buford, of Ashland. Joshua Bowling, age 33, of Flatwoods was taken to King’s Daughters’ Medical Center for medical treatment. His condition is listed as serious.

Details related to the cause of the crash are still pending. Under Kentucky motor vehicle laws, the parties responsible for the accident can be held legally liable for the accident, injuries, and deaths, related to the accident. Persons who are injured in Kentucky auto accidents can bring Kentucky Personal Injury Claims. The families of persons killed in Kentucky auto accidents can bring Kentucky Wrongful Death Claims. Depending upon the facts surrounding the accident and matters specific to each individual, the legal claims can and will vary.

Felecia Burton, age 40, of Lexington, Kentucky, was killed Sunday morning after being struck by a van. This tragic accident happened around 4:30 a.m. Sunday. Burton and friends had left a bar and were walking along the roadway in Okolona neighborhood area when for unknown reasons Burton stumbled into the roadway and was struck by a van. Police reports indicate that alcohol may have been a factor in causing this accident. If alcohol is determined to be a factor, Burton’s family may have a claim against the bar that over served the alcohol that lead to this accident. This type of legal action is generally known as a Kentucky Wrongful Death Claim and more specifically known as a Dram Shop Action, in cases of over serving of alcohol. Dram Shop actions, depending upon the parties involved, can be either 1st party claims or 3rd party claims.

Under the legal causes of action for both a Kentucky Wrongful Death Claim and a Kentucky Dram Shop Action, the family of Ms. Burton can seek legal civil damages under Kentucky Law.

A motor vehicle crash in Graves County, Kentucky occurred Sunday at the intersection of Ky 80 and Ky 97 when a vehicle failed to yield the right-of-way while attempting to turn onto Ky 80. the accident resulted in injuries to both drivers. A passenger, 17 year old Kelsey Gibson, of Murray, Kentucky, was severely injured and airlifted to Vanderbilt hospital to be treated for her injuries.

Ms. Gibson, a passenger cannot be liable for this accident, and as such Kentucky law will afford her and her family the right to seek Kentucky civil law damages. Anytime a person is airlifted to the hospital the medial expenses, including the stat flight, will be substantial. As such, knowledge of insurance laws and avenues of coverage flexibility are important to consider early in the process of seeking treatment and protecting the legal rights of the innocent injured person.