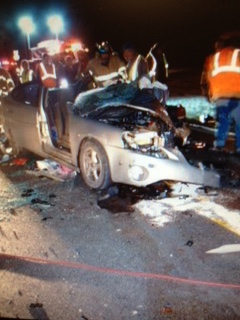 A Kentucky car accident last Wednesday sent 5 people to the Hospital. Most of the victims had to be airlifted via helicopter. The crash happened Wednesday around 8:00 p.m. when a 2004 Pontiac Grand Prix traveling eastbound on Ky 80 crossed the center line of the roadway and struck a 2006 Honda CRV head-on. The Pontiac was occupied by its driver and 2 passengers, both daughters of the driver. The CRV was occupied by Stanley Woods and Darlene Woods, of London. All five people had t be extracted from their vehicles, and suffered severe injuries.

In serious automobile accidents like this, it’s important that the injured persons obtain legal counsel quickly and preserve the evidence from the crash and reserve insurance coverage payments until such time that the full extent of the expenses can be determined. While no one intends for an accident like this to happen, legally persons are still responsible for driving negligence that injures others. As such injured persons need to protect their rights of recovery and compensation for their injuries, medical bills, out of pocket expenses, lost wages, and suffering. These are referred to as Kentucky legal damages (Link to further explanation of legal damages that injured persons are entitled to under the law).

Information about legal rights and compensation under the law for Kentucky auto accident victims can be found by contacting the Ackerson Law Offices (502) 882-5176 for a free consult. Information can also be found at www.kyfirm.com.